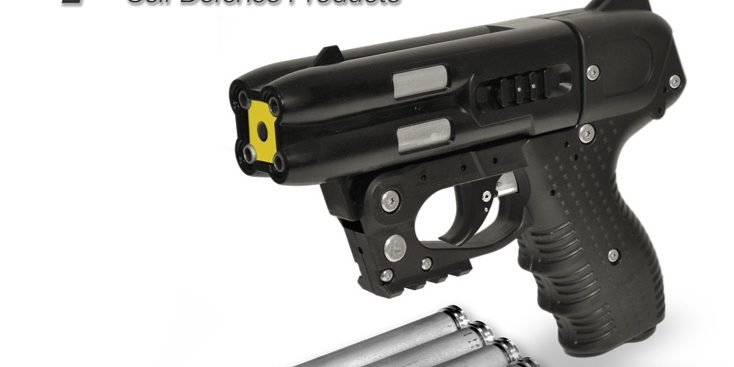 We simply have to accept the reality that the world we live in is no longer a safe place. Students are getting shot inside school; murders are happening even in the most unlikely places. You can never be too safe. If you are looking for self-defense weapons that could help you escape what could be a dangerous incident, take a look into the JPX4 4 Shot Pepper Gun with Laser.

The JPX4 Pepper Gun with Laser is more than just pepper spray. It looks not exactly like a gun but similar, so when you hold it up especially in the dark, an attacker might think you are actually holding a gun. It is waterproof, shockproof, and it requires no batteries. This police grade pepper gun is exactly the weapon you need if you want something that’s effective in defending you yet non-lethal.

There are many self-defense methods that a lot of people take into practice. Others carry guns while others just wear bulletproof vests. There are some who would learn martial arts and others have knives and other sharp objects. Other self-defense weapons might cause death. You might kill your attacker and forever live with the fact that you have someone’s blood in your hands even if that’s someone who could have killed you too. You might also hurt yourself if you are holding a lethal weapon. With the JPX4 4 Shot Pepper Gun, you can still have enough protection without being deadly. You will be able to stun your attacker and will probably have him immobile until help can come.

The JPX4 Pepper Gun with Laser is sleek and light, which makes it ideal to bring with you everywhere you go. It fires up to 23 feet, so you don’t have to wait until an attacker comes near you to begin protecting yourself. Unlike a regular pepper spray that requires you to be a few feet or even inches away from an attacker, you can fire this from a safe distance. Sometime, the mere appearance of the JPX4 4 Shot Pepper Gun alone could be enough to scare an attacker away.

The JPX4 4 Shot Pepper Gun with Laser can also help you reach your target accurately. There is a version of this without a laser, which is meant for those who are experts in target shooting. It is best to choose the one with a laser light to ensure that you will hit your target on the right spot. Each package comes with a guide to help you learn how to operate it.

You can never be too sure about your safety. Even in your own home, you would want to be prepared in case an intruder comes in. To feel safe and secure at all times, have a JPX4 4 Shot Pepper Gun with you.