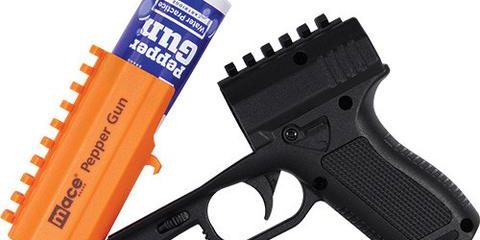 There are instances where you cannot carry your concealed handgun. Either you are going to a state where carrying a gun is illegal and you cannot get a permit in time or because you are going to an environment that is not ‘permissive.’ When such happens, the only way you can protect yourself against perpetrators is by use of non-lethal weapons such as pepper spray and Tasers. Non-lethal weapons are recommended not only for civilians looking to protect themselves but also for police officers in their bid to reduce deadly force.

The Rise Of Non-Lethal Weapons

Non-lethal weapons were given more airtime when following deadly shootings by police officers. When Michael Brown was shot and killed by Officer Darren Wilson in Ferguson, MO, protests, and debates about the use of lethal force for self-defense and apprehension of perpetrators gained momentum.

The momentum went on after an unarmed man was shot and killed by a police officer in South Carolina. These two shootings spiked concerns on the use of lethal weapons by anyone for self-defense. The technology for non-lethal weapons is still developing. Besides the good old pepper spray and stun guns, more has to be done to make these weapons as efficient as concealed handguns.

Non-Lethal Means Have Been Used Effectively By Police

Unlike deadly weapons, civilians do not need training to handle non-lethal weapons such as stun guns. These weapons have proven to be effective in curbing perpetrators as seen by recent changes in police operations. Because not all perpetrators come to you with deadly weapons, having a less-than-lethal weapon will incapacitate them for a while, giving you a chance to run for your life.

Some of the less-than-lethal means that police have employed include rubber bullets, pepper sprays, Tasers and beanbag projectiles. These non-lethal means are great when dealing with situations considered ‘safe.’ For instance, when perpetrators are carrying less lethal weapons or you are just dealing with an unarmed person who is under the influence of drugs, or maybe you are dealing with a burglar who shows into your house with a cane, pepper spray or stun gun will work just fine.

Police have found success with non-lethal ammunition, at least in most situations. Because other non-lethal means are not as efficient, police officers now rely on Tasers which have been on the market since the 1960s. Tasers became popular in 2011 were more than 15,000 military and law enforcement agencies were using Tasers according to the National Institute of Justice. Tasers easily fit on belts and are effective up to 35 feet.

The success of non-lethal weapons in stopping a good number of perpetrators by police officers is a sure sign that these non-lethal means can be used for self-defense by civilians. Police are always facing perpetrators with deadly weapons, unlike civilians who might not be involved in a deadly shooting in a long time.

Tasers are the only expensive non-lethal weapons with a single unit costing about $1000. On top of that, you will need to buy an electronic dart cartridge. This is in comparison to a good shotgun that goes for around $350. However, with a Taser, civilians are safe from lawsuits involving the use of deadly force.

Most non-lethal weapons are legal in most states, unlike a concealed handgun that may require a permit in most states. This means that where you cannot carry your handgun, you can carry your less-than-lethal weapon such as a stun gun. This keeps you protected at all times. The same case applies for when you are going in an environment that restricts concealed carry handguns.

This way, you do not have to invest thousands of bucks on security as you will have a weapon on your always.

Just like deadly weapons, non-lethal weapons have to be used carefully to ensure that unarmed innocent civilians are not harmed. When you use pepper sprays, you disburse it in the air, and anyone near can be affected. While you will direct it towards the perpetrator, there is no guarantee that the person next to you will not be affected. This has been seen in the use of teargas canisters by police.

Some, such as stun guns and canes, are not disbursed in the air and are safer for bystanders. Whichever weapon you choose to use, ensure that you use it effectively towards the perpetrator. With weapons such as a stun gun, you might need to be physically fit to battle a perpetrator and use the gun.

Defending Yourself In Your Home: Things You Can Do To Decrease Your Chance of Robbery and Increase Your Safety
July 28, 2017