Although there is no substitute for proper training, most people do not have the time to learn or are capable of mastering self-defense techniques. This means that you have to rely on the best self defense weapons to prevent an assailant from doing harm to you.

However, carrying a gun may not be legal in your state and with few exceptions requires a permit. Plus, a lethal response is something many people are not comfortable with making. Especially when there are good non-lethal devices available.

What follows are the best self defense weapons that are non-lethal. This means that most states and localities will allow you to carry them without a permit.

These personal safety alarms are quite effective and can be used by anyone, even those with some physical limitations. These instruments are based on noise that is so loud it can cause confusion or disorientation allowing you to 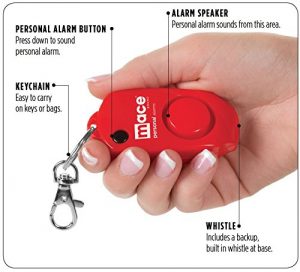 get away. Plus, they are totally non-lethal and can alert others when activated.

There really is no downside apart from the fact that you have not stopped an assailant, but simply have disoriented that person for a short time. You will need to use that time to get some distance between you and them.

It may seem like a simple stick at first, but the baton is quite effective and one of the best self defense weapons you can find. It is simple to use, easy to deploy, and when in the hands of someone who has been trained, they can be quite effective.

But training is crucial to using the baton correctly. Without that training, it’s possible that the baton may be taken away by the attacker and used against you. Plus, some states and localities do not permit the use of a baton. You will need to check with your local authorities to ensure that you can carry one.

Both a great weapon for self defense and handy when the lights go out, the proper flashlight can be used in many ways like a baton. A good flashlight that is designed to be carried for self defense is easy to employ. Plus, if you have a strobe feature and the light is bright enough, it can temporarily disorient an attacker allowing you to get away.

The downside is that striking someone to the head or face with a flashlight may be illegal even in self-defense.  You will need to strike the collar bone, legs, or another part of the body which will require some training.

These simple, effective weapons are used much like brass knuckles except they have the practical function of being on your keychain. They are easy to

use, and many people will have the knuckles ready when they are walking through dangerous areas. This device is basically twice as effective compared to striking with your bare knuckles.

On the downside, they cannot be used at a distance. Plus, you still have to strike with some accuracy if they are going to be effective. They are best used by those with some training, so you can make the strike count.

A good pepper spray can be used at a distance, is easy to carry, and simply to deploy. Plus, pepper spray is legal in all 50 states with only limited restrictions in certain areas. They work by inflaming the tissue that surround the eyes which makes it difficult for the attacker to focus and continue to

Pepper spray allows you to get away and call the authorities. It’s not quite as effective as a taser but is more reliable to deploy. For many, pepper spray and the pepper spray gun are the best of all self defense weapons.

Until the taser came along, the stun gun was one of the most popular of all non-lethal defense weapons. This is because a stun gun is generally quite effective, is easy to use, and simple to deploy when you are under assault. Plus, they are fairly inexpensive as well, making them a great choice for those who have little money to spend on self-defense weapons.

However, a stun gun cannot be used at a distance and is not quite as effective compared to a taser which has overtaken it in some ways. But if you do not have a taser or pepper spray, then a stun gun is a good choice.

There are several advantages with this weapon, most notably that it is legal to use in all states. Plus, it is quite easy to use as well. Simply grip the pen and strike. Holding such a weapon in your fist boosts the impact of the blow that you deliver.

The downside is that you cannot deploy the tactical pen at a distance. Plus, the weapon may turn lethal if you hit the throat, top of the head, or eyes when defending yourself. You should get some training if you plan on using a tactical pen.

Perhaps one of the best non-lethal self defense weapons, the taser is easy to operate, can be used at a distance, and can incapacitate an assailant so you can get away. It is also quick to use so even if you are surprised you may still have time to deploy it. Plus, the taser is legal is most states without having to get a permit.

About the only downside is that occasionally a taser does not work properly. This is usually because the wires do not fully come into contact with the attacker. But otherwise, they are an excellent defensive weapon.

You do not have to be a black belt in the martial arts, but it does help to get 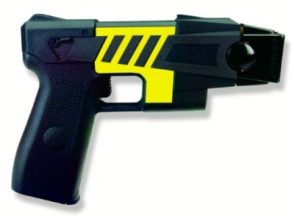 some self defense training. The best weapons in the world do you little good if you do not know how to react. Learning some simple moves and practicing them can help you be better prepared if you are attacked.