Mace vs Pepper Spray  – What is the Best? 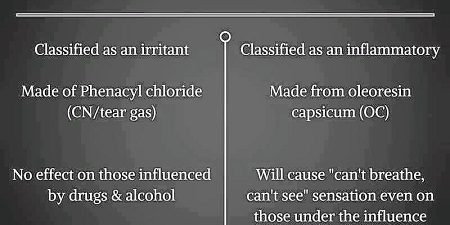 In looking for a self-defense product, the debate between mace vs. pepper spray in terms of which one works better is still a prime topic. On the surface, it may seem that both mace and pepper spray are quite similar. But the truth is that there are substantial differences between each product that you should know before deciding which one to purchase.

This means you will need to understand what each product is, what it does, and the differences between them to make the best-informed decision.

It should be noted that chemical mace as first developed in the 1960s is no longer available. It was banned due to the thousands of injuries that it caused not only to those who were sprayed, but also the police officers who used it. Plus, traditional mace was 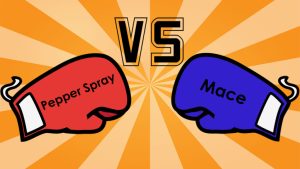 ineffective against those under the influence of drugs or alcohol, which is the primary target of mace.

Today, the term “mace” is used to describe a brand of self-defense products which actually includes pepper spray. This is similar to all bandages being called “band-aids” or all copies being called “Xerox”. However, a modified version of the original mace product is still being produced which is commonly referred to as “tear gas”.

This is a chemical substance that no longer includes the toxic elements associated with the original version of mace. It works when inhaled to increase the production of tears to temporarily blind the target. Plus, this version includes irritants which also distract the person who has been struck by the mace to allow you time to get to safety.

What is Pepper Spray?

Pepper spray is a combination of different substances that are designed to render an individual incapacitated from 15 minutes up to an hour. When the pepper spray is inhaled, it will cause the following symptoms;

The effect is one designed to incapacitate an assailant since their focus will shift to the blindness, irritation, and difficulty they have in breathing. It is a temporary state from which almost all those who are struck with pepper spray will fully recover. However, for the time that they have been struck, it will be most discomforting.

With both pepper spray and mace, they are designed to be used when a potential threat is about to strike. Both mace and pepper spray come in sprays or guns designed to be quickly used. This means that you should keep it handy on your person, such as on the side of your purse or on your belt.

Both versions can be sprayed and fired at the assailant from a distance of four to twelve feet. It is recommended that you follow the instructions and aim either at the face or chest depending on whether you use mace or pepper spray.

Even striking the chest can cause a serious distraction as even the vapor from the spray can cause the eyes to water. This means that even if the product is recommended to strike the face you should still aim at the assailant who may be trying to avoid getting hit. So, the chest might be the best target to strike.

Differences Between Mace vs. Pepper Spray

Both mace and pepper spray are applied in the same manner. They are in liquid form that comes from a spray or cartridge that is designed to slow, if not stop an intruder or assailant in their tracks. The goal is incapacitation which buys enough time to escape 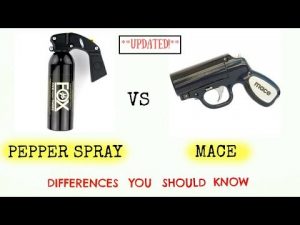 and call the authorities.

Under the Influence: Pepper spray will affect anyone regardless of their condition. This means even someone heavily under the influence of drugs or alcohol will still suffer the same debilitating effect. This is because the areas affected by the pepper spray will overwhelm even a heavily inebriated individual.

Legality: The original version of mace contained phenacyl chloride or CN, a product used in tear gas and also included many toxic elements which have been banned. The current CN formula for mace is illegal in the states of Hawai’i, Wisconsin, and Washington D.C.

Here, pepper spray is superior because it is legal in all 50 states. Mace is illegal in a few states and the older form has been banned. Using a legal, non-lethal product for self-defense is a solid legal defense in case you are sued. This makes pepper spray a better choice, especially in states where mace is not legal.

Which One Works Better?

That is a difficult question to answer since mace is now a brand term used to describe a wide range of self-defense products designed to incapacitate an assailant using a spray or liquid deterrent. This means that under the category of mace, pepper spray is included. However, the current product of mace does have differences compared to pepper spray.

When looking at the current CN version of mace, pepper spray is superior in most regards. This is because the spray works on individuals who are under the influence of alcohol or drugs. Pepper spray is also legal in all 50 states and the District of Columbia. When it comes to mace vs. pepper spray, you should consider pepper spray first before moving on to products such as mace.

Category: Pepper Spray for Self DefenseBy UBackOffOctober 21, 2019Leave a comment