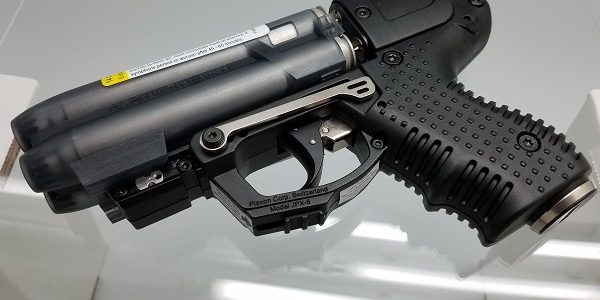 Has a friend mentioned to you recently that wasp spray would make a good alternative to using pepper spray as a weapon of self defense? Maybe you read an article on the internet or received an email that suggests the use of bee spray instead of pepper spray? Granted, these alternatives to pepper spray would definitely impair a potential criminal, they probably aren’t the best means of protecting yourself unless you have no other choice.

Wasp spray is a potent mixture of chemicals designed to kill wasps, and when sprayed into a human’s eyes or inhaled through the nose or mouth, the affects are quite hazardous and long-lasting. In fact, the attacker would suffer the symptoms until they acquire an antidote, which means a hospital visit. To anyone who has ever felt seriously endangered by an attacker, this may sound like karma stepping in to punish a criminal. In reality, what it means is that you can be held legally responsible for the damage that you caused by using wasp spray for anything other than repelling and killing wasps. If you read the label of most forms of wasp spray, it states that using the spray on humans is illegal, which means you are likely to end up sued even if your target attacked you first.

Another issue with wasp spray is that the effects on a human are largely unknown since it wasn’t designed for this use. It may make your target’s eyes water and their face swell up. Or, it could just make them really mad. It is specifically designed to kill small insects and may have very little effect on a human. Then again, there is also the risk of your target being deathly allergic to one of the chemicals in the spray. Pepper spray, on the other hand, has been chemically designed to react with the human body. It causes a person’s eyes to burn, which is accompanied by watering and temporary blindness, but these effects don’t cause serious long-term damage.

Some might argue that not all wasp sprays are harmful to humans. The problem with this is that not all wasp sprays have been tested on humans. In fact, few of them have been. And in any case, how would you know which brand or specific type is safe to use on a human when all of them specifically warn against using the spray that way? You must also consider that the wasp spray canister may take several seconds for the spray to expel and does not always function the same way every time it is used. It might also take additional time for the attacker to develop a reaction to the wasp spray. On the other hand, pepper spray canisters have been designed for quick reaction time. Plus the pepper spray itself is so potent that it only takes a quick spray to have your attacker rolling around in agony.

All in all, pepper spray is a much more reliable self defense aid. It is safe enough that police all over the world use it on a daily basis and its effects are well researched. Pepper spray is also legal in every state and you won’t get in legal trouble for using it against another human who is attacking you. Wasp spray, on the other hand, is unreliable and risky to use for self defense. Both the manufacturers of wasp spray and the United States Border Protection Agency (the largest purchaser of pepper spray in the country) are against the use of wasp spray as a weapon.